By Michael J. Sullivan (Copyright 2014) We are continuing our study of the three eschatologies (views of prophecy) within Islam, Judaism, and “Christian” Dispensational Zionism which emphasize a “in the land,” “end time,” “holy war,” by which their god or religion overcomes the others. These views of eschatology have contributed […]

The “already and not yet” or “in-breaking” of the Kingdom of God Introduction I am continuing my series in critiquing Charismatic Dr. Michael Brown’s arguments that he has levied against Cessationist Pastor John MacArthur (my former Pastor and College President). This series deals with answering the question as to which […]

Introduction I am continuing to critique Michael Brown’s book, Authentic Fire and responding to Charismatic arguments that I once used against Pastor MacArthur and other professors and students at The Master’s College (as a young Charismatic having graduated Calvary Chapel Bible College). Having become a Full Preterist (while attending The […]

I am continuing my series in critiquing Dr. Michael Brown (Charismatic – Authentic Fire) and Pastor John MacArthur (Cessationist – Strange Fire). While I agree with Pastor MacArthur that the sign and revelatory gifts have ceased, I also agree with Dr. Brown that MacArthur (and Cessationist Futurists in general) does/do […]

Introduction: In part 2 of this series responding to Cessationist Pastor John MacArthur (Strange Fire) and Charismatic Michael Brown (Authentic Fire) we looked at the various views of “that which is perfect” (1 Cor. 13:10) giving special attention to the errors MacArthur makes on the passage due to his commitment […] 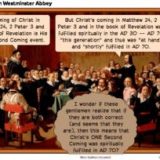 Introduction Creeds and Full Preterism As depicted in this painting (see above), imagine one of the debates that the formers of the Westminster Confession of Faith had in the Westminster Abbey went something like was this: Man #1 (standing – Classic Amillennialist) – “The coming of Christ in Matthew 24, […]

A Biblical and Full Preterist Defense

Introduction:  I have been a Christian now for thirty-three years and have watched churches and denominations split over their views of the sabbath, communion and baptism – even to the point of referring to other groups as “legalists” or “Antinomian” (and thus doubting their salvation).   The churches split on eschatology […]