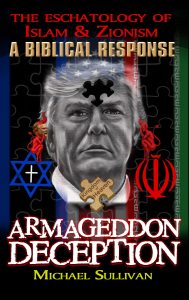 We live in a day where our presidents and politicians are highly influenced and manipulated by Israeli Zionism, Islam and Christian Dispensational Zionism to make political decisions which will allegedly usher in an end-time holy war or coming (first or second) messianic figure; thus the devil is sitting on President Trump’s shoulders and whispering in his ears. Only a correct and exegetical understanding of the first century imminent time frame and spiritual nature of Christ’s Second Coming and arrival of His “kingdom of Heaven” (the golden missing puzzle piece) can expose, correct and reverse the alleged inevitable and supposedly imminent “Armageddon Deception,” or the “Gog and Magog Deception” present in all three of these systems. It is only then that we can truly begin to bring peace to the Middle East.

I wish to express my everlasting gratitude to my beloved wife, Denise, whose patience and longsuffering toward me and loving support in writing this volume has meant the world to me.

This book would have never come to fruition without Pastor David Curtis of Berean Bible Church inviting me to speak at one of our annual conferences where I lectured on the contents of this book. I had so many people over the years tell me that those lectures and subsequent articles needed to be turned into a book, so here it is.

Special thanks to Jeff McCormack in his labors on the cover design work and to Adam Maarschalk for his meticulous editing. It’s a blessing to have Full Preterist Christians gifted in these areas.

The Christian Full Preterist Solution:  Believers in Messiah/Jesus Are God’s New Covenant Sacred Space – the Kingdom is Now         “Within” and “in Christ,” Not “in the Land”

The Christian Full Preterist Solution:  The “Big Three” (Mt. 10:22-23; Mt. 16:27-28 & Mt. 24:34) – Jesus Promised that His Second Coming and the End of the Old Covenant Age/World Would Occur in the Lifetime and Generation of the First Century Church—Promise Fulfilled by AD 70

How was the Resurrection Fulfilled by AD 70?

How was the “Rapture” Fulfilled by AD 70?

How was the Millennium Fulfilled Between AD 27 – AD 67?

How to Evangelize Muslims, Zionists and/or Reach Evangelical Zionists from Their Own Sources of Authority.

Pentecostal and Charismatic Zionists and their Conflicting or False Prophecy – the Miraculous Sign and Revelatory Gifts Ceased in AD 70!

Everyone looking at the conflict in the Middle East realizes that while engaging militarily at times is necessary, the ultimate solution will have to come from another area. Therefore, many see the various conflicting religious theologies or forms of eschatology (study of prophecy) fueling these areas as being solved ultimately through a “war of ideas.”  What they mean by this is really a “war of theology/eschatology” that needs to change the hearts and minds within these areas before lasting peace can emerge.

Unfortunately, these three futurist eschatological systems of Islam, Israeli or Talmudic Zionism and Evangelical Zionism all share common errors that perpetuate conflict in the Middle East and the U.S. such as:

But what if it can be proven that these Biblical “end time” signs and “holy war” scenarios have already been fulfilled and that the OT and NT predicted a “new” and spiritual kingdom to be established within the hearts of His people rather than the establishment of a physical earthly paradise on earth?

What if it can be proven according to Allah’s “revelations” that Muhammad was a false prophet, and thus the Quran is not a revelation from God?  What if it can be proven from their own Islamic sources that the Old and New Testaments could not be corrupted and that they do contradict the Quran?  Where does this leave and lead the Muslim when he or she is commanded to go to the “people of the book” (Christians) to test and judge if the Quran is accurate and/or consistent with the Bible?

And for the Zionist, what if all of the land promises were actually fulfilled in the OT and therefore the modern state of Israel is a non-starter?  What if the OT prophetic material concerning Israel being saved or gathered “in the land” was also typological, pointing to a greater and spiritual fulfillment in the prophesied coming new covenant that would be realized “in Christ”?

Therefore, does the God of the Bible really support or recognize modern day Israel as “God’s people”?  Is modern day Israel and the events of 1948 or 1967 a “super sign” of fulfilled Bible prophecy, or was it simply formed and funded by the Rothschild dynasty and Khazarian mafia which seeks to globally enslave the Gentiles through monetary means using modern Israel as one of many places to conduct some of its affairs?

How many passages in the OT and NT have they and Evangelical Zionists claimed were fulfilled in 1948 or 1967 that are grossly taken out of context in order to back and support their false and manipulative religious/political systems?

Are Christians in the U.S. supposed to support modern day Israel in their theft and violence because God will allegedly “bless” us if we do?  Are some Evangelical Zionists such as C.I. Scofield and John Hagee correct to condemn Christians as being in “sin” if we don’t support the modern Israeli agenda?

Is it just possible that modern day Israel is simply another unbelieving nation, among many others, that needs the gospel and to be held accountable for their land agreements with the Palestinians?

What if it can be proven from Jewish sources prior to Jesus and after AD 70 that Messiah would be divine and had to have arrived even upon the clouds of heaven before the second Temple fell in AD 70?  What if I can show Jews that their own sources of authority teach that a spiritual resurrection and spiritual fulfillment of the Temple promises were to be fulfilled by AD 70?

And what if I can prove to the Evangelical Zionist that both the OT and NT teach that a Messianic kingdom and temple would be fulfilled spiritually and “within” the believer, and that they don’t teach that a physical or earthly kingdom or temple will be set up in modern Jerusalem?  And what if I can prove these to be true not only from the Scriptures, but from the teachings of the orthodox Christian Church?

What if I can prove to the Evangelical Zionist that the “rapture” of 1 Thessalonians 4:15-17 is not a promise made to them whereby they are going to disappear from planet earth just before things get really bad here on earth?  If I can prove this passage was fulfilled by AD 70 and the Christian Church will never be raptured off the planet, would this affect the way the Church lives, should be involved in politics, and ought to develop long-term strategies to take back our country and fight against wicked globalism?  If I can do this, perhaps we can awaken the Evangelical sleeping giant from the mentality that says, “You don’t polish brass on a sinking ship.”

What are we to make of the Charismatic Evangelical Zionist movement that brings false prophecies in the name of God concerning the Second Coming and the activities of our politicians and even our Presidents?  Did the gift of prophet and prophecy in the OT and NT contain error or was the prophet to be 100% accurate?  Did the office of prophet and the miraculous gifts of prophecy, tongues and knowledge stop or cease in AD 70?  If so, what are we to make of all the false, failed and often times conflicting “prophecies” arising from the Charismatic Zionist churches?

These are all very important questions when analyzing these three “end time” religious systems and trying to find an effective “war of ideas” that can bring as much peace as is possible among them.  Therefore, let me answer some of these questions and give the reader my propositions and solutions from the outset. The rest of this volume is designed to prove my propositions:

Jesus and the NT authors are consistent with OT prophets who used common apocalyptic language filled with metaphors and symbolism.  When God came on the clouds in the OT and there was de-creation language, He came through an invading army and caused the nations being judged to have their civil and religious worlds come to an end.  In the Olivet Discourse Jesus prophesied that the age or world (heaven and earth) of the old covenant system would end in His generation.  Neither Jesus nor any NT author predicted that the end of world history was “near” or “soon” to take place.

The events of 1948 have nothing to do with the fulfillment of Bible prophecy, contrary to the empty claims of Zionism in its various forms.  Neither modern-day Judaism nor Islam has any religious right to “holy land” in the Middle East or the planet today.

The Bible does not support a Messianic Kingdom or paradise on earth.  Jesus taught that when He would be revealed from heaven like the sun shining from the east to the west, His Kingdom would not be seen with one’s eyes, but rather would be realized “within the heart of a person” (Lk. 17:20-37).  It is more than ironic that people refer to Islam, Talmudic Zionism, and Evangelical Zionism as the “three Abrahamic faiths.”  This is odd since Hebrews makes it abundantly clear that Abraham’s faith was not in an earthly country or city but a spiritual or heavenly one, “For we have not here an abiding city [a city named Jerusalem on earth], but we are seeking the one [city / New Jerusalem] about to [‘mello’ in Greek] come” (Heb. 11:10-16; 13:14).  This is consistent with the “Jerusalem from above” being the new covenant (Gal. 4:26) which Revelation teaches is the New Jerusalem which was in the process of coming down and did “shortly” arrive in AD 70 when the earthly Jerusalem/Babylon was destroyed (Rev. 1:1; 3:12; 22:7, 10, 20 NIV).

Outline and Approach to the Solution

My approach is twofold:  First, I will develop what each of these three systems teach concerning sacred space and an imminent Second Coming of Jesus the Messiah to usher in an end-time holy war.  Secondly, I will demonstrate how these overlapping prophetic concepts have either been proven to be false and failed predictions, or are in conflict with what the Bible actually teaches.

I should also note that since Islam says that Jesus never claimed to be God and rejects the Deity of Christ, and since modern Jews claim that a divine Messiah is nowhere taught in the Torah or in their rabbinic traditions, I will deal with this subject in much detail as well.  It is not sufficient to tear down a false religion, but one must do so while pointing the person to the truth and when possible do it even through their own sources of authority.

I will now begin to make my case proving that all of my propositions above are in fact true, and therefore make a truly Biblical and common-sense case which will achieve more peace in the Middle East than is present today.

I dedicate this book to President Trump who did not listen to many who wanted to lure us into the “endless wars” in the Middle East.  In fact, not only did he not listen to the enticements of Islam, Israel and Evangelicals to engage in war in the Middle East, but he made peace deals.  My work is simply a theological treatise which can be used for Christian politicians and presidents to take peace in the Middle East to the next level and provide a platform for “Christian Patriots” to take back this great country!